If you have ever wanted to learn how to bead, here is a quick tutorial of basic peyote stitch also known as gourd stitch. There are millions of things you can make once you get this stitch down.

Peyote stitch is typically worked with delica beads or a good quality seed bead. I highly recommend starting with larger beads like the perler beads to practice. Perler beads now come in a mini size which would be great to practice with too and are much more comparible to delica beads. Delica beads are consistant in size which makes for prettier and easier stitching of the beads. Size 11 is the most common and there are tons of colors and finishes to choose from. I get most of mine from http://www.fusionbeads.com/ 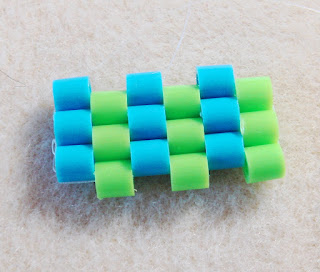 Let's get started:
You will need beads in two colors
size 10 0r 12 beading needle
beading thread. I recommend using nymo thread for practice. Don't forget to condition your nymo thread. To condition it, simply pull on it stretching it out a bit and taking the curl out.

Watch the video for complete instructions. Please let me know if you have any questions.

Posted by The Vegan Hippie at 7:15 AM No comments:

Here is a cute ornament to make for friends, co-workers and even family. They are really inexpensive too. And the best part, once they are finished, the glitter doesn't make a mess all over.

Let's get started.
You will need to choose a font and type out the names you will be using. It's best to use a laser printer. If you use an inkjet, I'm not sure how the ink will hold up. Once the name or names are printed, very carefully trim around the font.

You will also need the following:
extra fine glitter
varnish
plastic ornaments that you put together after decorating
some type of embellishment to go next to the name
ribbon for hanging

Once the name is cut out, put a light coat of varnish in the center of the ornament where you think would be a good place to display. Then add the name to the varnish. Using the back of your paint brush, gently tap the name to make sure there are no air bubbles. Then add whatever embellishment you have found.

Pour some varnish into one of the halves and swirl around coating the inside. Pour out the excessive varnish. Pour the glitter into the ornament and swirl that around too. Lay open side down to dry. Complete the other half this way and let dry.

Once both halves are dry, go back and fix or touch up any spots you might have missed. Add a ribbon for a hanger and you are finished.

Please watch the video for more details and if you have any questions, feel free to ask.


Posted by The Vegan Hippie at 6:17 PM No comments:

One of my most favoritist Christmas treats is called Roasted Pecan Supreme. It's traditionally made with egg whites. Imagine my surprise when I discovered #aquafaba. Whoever figured out that the liquid from a can of chickpeas could be transformed into a meringue is a genious. I've heard you can also use the liquid from white beans too but I have not tried that yet.

This is a really easy recipe to make. You just need to be really careful not to burn the pecans. Once they are burnt, there is no saving them. In my video that I will be posting, I will show you my batch of burnt pecans.

Here is what you will need:
20 ounces of pecan halves
the liquid (a.k.a. aquafaba) from a 15.5 ounce can of chickpeas
1 cup of vegan sugar
1/2 tsp salt
1/2 cup melted vegan butter

Preheat your oven to 350 degrees. While the oven is preheating, put the aquafaba in a large bowl. Beat with either a hand mixer or a stand alone until stiff peaks have formed. I used a hand mixer and it took about tn minutes.

The oven should be preheated by now. Line a cookie or baking tray with aluminum foil. Arrange the pecans in a single layer onto the pan and roast for 10 minutes. You have to really be careful of the time. If you go any longer than 10 minutes, the pecans will probably burn.

While the pecans are roasting, slowly add 1 cup of sugar to the meringue. Add a little at a time beating really well between each addition of sugar.

When the pecans are finished roasting, remove them from the oven and add them to the meringue mixture. Blend well ensuring all pecans have been coated.

Pour the melted butter onto the same pan that was used for roasting making sure the entire pan is covered. Add the pecan/meringue mixture and spread as evenly as possible. Put them back in the oven for 30 minutes stirring every 10 minutes. Do not go beyond 30 minutes. Take them out of the oven and let them cool at least 15 minutes before removing them.

Store them in an airtight container. Not sure how long they will last in the container because they are eaten so quickly, I really just do not know.

Thank you and I hope you enjoy these as much as I do.

Posted by The Vegan Hippie at 1:44 PM No comments:

Here is what you will need:
1 - 10 ounce package of frozen brown rice. If you can make your own rice, then by all means do so. I have never been able to make brown rice so I buy the frozen stuff. Don't judge me!!
1 tbsp oil
1 medium onion diced
8 ounces portabello mushrooms diced
1 bunch of asparagus chopped in to about 1/2 inch pieces
1 or 2 cloves of garlic minced
salt to taste

If you are using the frozen rice, cook it now and add to the medley. Enjoy.

Posted by The Vegan Hippie at 12:22 PM No comments:

I really love crafting and creating. Oh, about 20 years ago, I started making these cute wreaths with felt. To my surprise, the felt I had been using all along is already vegan. It's made with recycled plastic. How awesome is that. 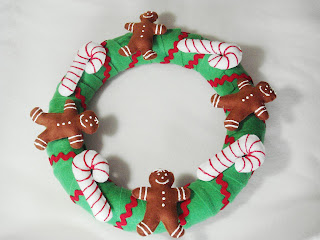 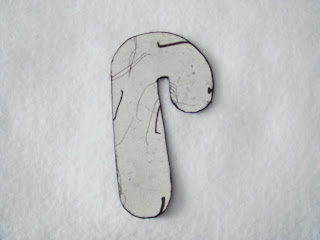 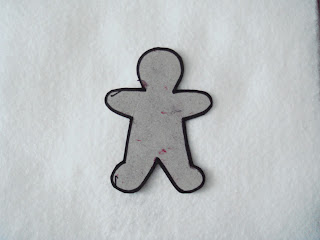 You can copy and paste these patterns to word and enlarge them. Then trace onto cardboard.

Trace the gingerbread pattern onto the brown felt four times. Pin to the other sheet of brown felt. Cut, glue sides together with hot glue. Leave an opening at the head, stuff with the poly fil and then hot glue closed. With the puffy paint, add face, buttons, stripes on arms and legs. Let dry for several hours.

Do the same for the candy canes. You will need four of these too.

With the green felt, cut into strips about 1 1/2" to 2" on the long side. Hot glue the strips together at the short end making one very long strip of felt.

Carefully wrap the wreath with the green felt. You should have a couple inches extra. Hot glue the end to the wreath.

Take the red rick rack and wrap around the green felt in the opposite direction making about a 2" space. You should have about a four inch piece remaining. Use that to make a hanger on the back of the wreath. Hot glue that down too.

Position the gingerbread men and candy cane's on the wreath how you would like them to look. Once you are satisifed, hot glue those down too.

And you are done. I really recommend watching the video for tips and tricks and for a better understanding of my madness.

Please let me know if you have any questions and if you need any help.

Posted by The Vegan Hippie at 10:18 AM No comments:

One of my favorite treats around the holidays is gingerbread. In any shape or form too. I had a taste for some gingerbread but didn't want to make an entire batch of cookies so I came up with a brilliant idea. Gingerbread porridge. Man o man is it delicious. Super easy to make too. You don't have to use amaranth either. It's just my preference. You can use oats, quinoa or maybe even grits.

Bring the water and amaranth to a boil in a medium pot. Reduce heat to low medium, cover and simmer for about 15 - 20 minutes.

Add the remaining ingredients and adjust the sweetness to your liking. Enjoy!!

Posted by The Vegan Hippie at 11:26 AM No comments: