I love taco seasoning. There I said it. It's out. I really do love it and even make my own which is way better for you than that store bought crap. Which by the way has silicone dioxide in it. You know, that stuff they put in shoes to keep fresh and tell you not to put in your mouth. Why on earth would we put in a seasoning mix??!!

Back to the subject. This is probably one of the easiest recipes to make. In a food processor, add 1 1/2 cups cooked chickpeas and 2 - 3 tbsps of taco seasoning and pulse just a few seconds until the chickpeas are crumble. And that's it. Get some romaine leaves or you can use vegan tortilla shells, get your favorite taco toppings and assemble like a taco. I like it simple with just some tomato and vegan sour cream. I used #Tofutti which is really good You can heat the mixture up in a frying pan with a little oil if you like. This will also give it some more texture too.


https://www.youtube.com/watch?v=0rB7na0cwvM&feature=youtu.be
Posted by The Vegan Hippie at 10:26 AM No comments:

Email ThisBlogThis!Share to TwitterShare to FacebookShare to Pinterest
Labels: tacos

These popsicles are a really cool and refreshing treat on a hot summer day. Or even if you like popsicles any time of year. Healthy for you as well. Kids will love them too and they are super easy to make. The hardest part about them is waiting for them to set up in the freezer. There are no chemicals, added sugar or dyes in these pops either. If you are going to use popsicle molds, I recommend paying for good quality ones. I've tried the cheap ones and they just do not work so well. Not for me anyway. Or you can try little paper dixie cups and popsicle sticks.

Here is what you will need:
1 cup unsweetened coconut milk - I used So Delicious
1 cup fresh pineapple
1/2 cup unsweetened shredded coconut - I used Bob's Red Mill
1 large speckled banana - Speckled because it's better for your digestive system and that's where the sweetness comes from.

Blend everything and poor into the mold. Do not poor to the top. Leave about 1/4" space for the handle/stick. You might have a little left not enough for another popsicle. Just drink it up. Oh yum. Freeze for about five hours. When you are ready for a popsicle, take them out of the freezer and let them sit out for about 10 - 15 minutes. They should pop right out. And enjoy.


https://www.youtube.com/watch?v=pFR05D_RMH0
Posted by The Vegan Hippie at 9:48 AM No comments:

Hey everyone!! I have to admit I never tried lentils until about two years ago. I thought they were gross and yucky!!! However, on my journey to getting healthy and promising myself I would try new things, I discovered I love lentils. You can use them for lots of things which I will get into in another post or two. But, did you know that eating just one serving a week of lentils will lower your cholesterol. So if it can lower cholesterol, why do people take medication for high cholesterol. Baffle's me. It's also high in iron and other things like potassium, zinc, calcium and niacin. And is a great source of fiber and protein.

They are so easy to cook too. Buy them dry and you will save lots of money. There are several different types but in this recipe I used brown. Here is my recipe for Lentils and Tomatoes. I love this so much I could eat it for breakfast and I have.

You will need:
3 cups of water
1 cup of dried lentils (I used brown)
1 bay leaf (this is to help with digestive issues you might have)
1 can of diced tomatoes
1 tbsp of dried basil, fresh would be better but you will need more. Maybe about 10 - 15 leaves chopped up
1 1/2 tbsps of dried parsley
1 1/2 tbsps of minced garlic
Salt of your choice. I use pink himalayan sea salt.

Here is my video to help you cook it up. Enjoy!!!https://www.youtube.com/watch?v=V9HpM6qTGoc
Posted by The Vegan Hippie at 2:07 PM No comments:

Email ThisBlogThis!Share to TwitterShare to FacebookShare to Pinterest
Labels: lentils

If you like southwestern style food, you will really enjoy this recipe. It's light, refreshing, filling, packed with protein and fiber and the best part, it is super easy to make.

Here is what you will need:
1 1/2 cups cooked quinoa
1 1/2 cups or 1 can of black beans drained and rinsed really well
1/2 cup of your favorite salsa
1/2 to 1 tbsp of organic taco seasoning depending on how much you like taco seasoning.
tortilla chips, organic is best or if you prefer something even lighter, you can go with some romaine leaves. It's really yummy.

You can also try it on a tortilla. I bet that is really good.

Please check out my video. Thank you!!!

https://www.youtube.com/watch?v=8yeFBaH4exs
Posted by The Vegan Hippie at 5:34 PM No comments:

Cooking quinoa (pronounced keen-wah) is so easy. Really it is. Easier than cooking rice. Be sure to rinse your quinoa in a fine mesh strainer. If you do not have one, put a coffee filter in a standard strainer to rinse. Just be careful not to spill the quinoa.

Quinoa is really good for you too. What is it you ask??!! Well, it's the seed of a grain to put it simply. It is a complete protein as well. Loaded with magnesium, potassium, vitamin E, fiber and is an excellent source of iron.

It is quite versatile too. I use it for everything from breakfast, lunch, dinner and snacks. For breakfast, you can cook it in almond or coconut milk and treat it like hot cereal. For lunch and dinner, oh the options are endless. You can even make milk with it. My current favorite is quinoa with black beans and salsa. I'll do a video and recipe on that later.

So, this is my first video, EVER. My fabulous friend Angie has been telling me for a very, very, very long time that I needed to start making videos with all of my creations. Today, I finally got my butt in gear and did it. It is short and sweet, just the way I like my videos. Hope you enjoy it.

https://www.youtube.com/watch?v=Mfo5RNHlzps
Posted by The Vegan Hippie at 5:15 PM No comments:

Who does not like cinnamon???!!! I don't think I have ever met anyone who does not like it. Even the smell of it is fabulous, especially around the holiday's. My house reeks of it in December. You can make ornaments with it too and you can even find it in candles.

The health properties are fabulous as well. There are so many benefits to it. It has been known to help lower blood sugars, cure infections and even cure a cold. It is also a cancer preventer and can help with PMS among many other things. #cinnamonbenefits

There are two types of cinnamon which I have to admit, I didn't know until about a year ago. Anyway, there is ceylon cinnamon that is considered to be the "true cinnamon" and apparently more expensive. Then there is chinese or cassia cinnamon that is less expensive than ceylon and this is what is typically used in the U.S. If you have cinnamon in your spice cabinet that says canela molida, this simply means ground cinnamon.

I put it in everything I can from my hot cereal, my banana breakfast shakes, zucchini bread and cookies. It is so easy to add to almost anything. Try some today. 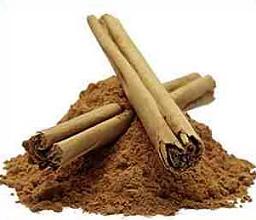 Posted by The Vegan Hippie at 6:59 AM No comments: